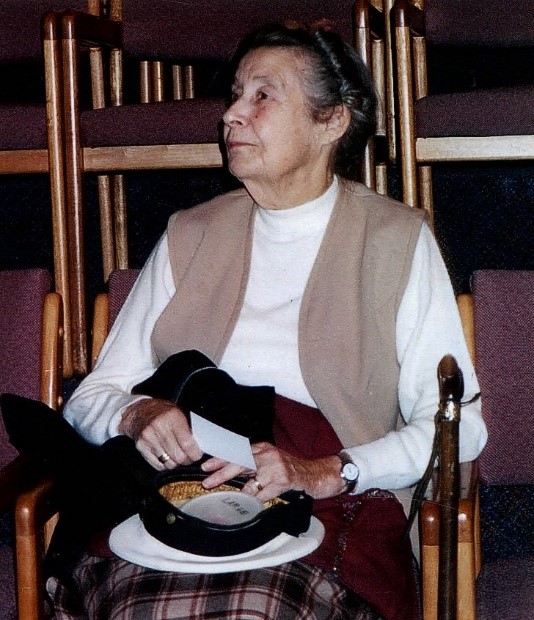 Kay Hirsch, courtesy of Prescott Center for the Arts

In March 1991 I interviewed Kay Hirsch, the costume mistress for the Prescott Fine Arts Association (now PCA). This was intended to be a theater piece for the Arizona Literary Review, published in Prescott, Arizona. It turned out to be much more. She was such a fascinating woman that I wanted to share this interview.

I met her at the Prescott Fine Arts Association in Prescott, Arizona. At the time of the interview, I wore faded jeans and a t-shirt with a creative design and had long hair.  (I still dress the same and still wear long hair). She was an eloquent lady and very proper in her greeting. Carefully, yet politely, looking me over she asked if it would be wise to confirm the interview with my boss at the magazine. When I told her that I was the Publisher and Editor she graciously motioned me to sit next to her at a dressing table without a pause.

I began the interview with her in the fitting room near a large walk-in closet full of many styles of shoes. Behind Hirsch, was a large clothes rack, full of period collarless shirts and suits ready to be fitted for a forthcoming play, which added a touch of theater. Her mood was alternately upbeat and serious as she reflected on the public and private events of her past 50 years.

“I grew up in a theater-going family in London. At that time, we had the very young, John Gielgud, Laurence Olivier, and Ralph Richardson. These actors are now all ‘Sir,’ but not at that time. All these people were all in their 20s and 30s, and it was a wonderful time to attend the theater. There was a program in which Alec Guinness played a sword-bearer. Margot Fonteyn-the famous ballerina), the same age as I am, was just coming along. That’s why I became interested in the theater.”

“I could sew well, so this was my entrance to the theater. I had no desire to be on the stage, but I wanted to work in theater. I fit into the seamstress role.”

She attended the Croydon School of Fine Arts and in 1938 became a member of the costume staff at the Westminster Theatre, London which was roughly equivalent to Off-Broadway in America.

“We did several plays a season. A year and a half later, World War II began and the theaters closed down for a while in London.”

Not only did she perfect her profession through experience and hard work, but she seems to have inherited a good dose of talent from her grandfather who was a very exclusive lady’s dressmaker in London.

“He made dresses for ladies to be presented in court back in the late 1800s. I sometimes think that my grandfather would be tickled that his daughter’s child is often making replicas of dresses he made many many years ago.”

“My future husband was sent to the American Weather Office and that’s how we met in August of 1943. With our mutual interest in theater, we spent our free time with the stage and concert party on the base. I was doing the costumes and he was acting or directing skits. That’s how we really got to know each other.”

The two young lovers entertained the American and British troops at Nutts Corner, took bicycle rides on their time off, and talked about the theater.

She applied to the WAAF request for volunteers for the Air Transport Auxiliary, never expecting to be accepted by the RAF for the WAAF. Then, in 1944, the RAF recruited Kay and 1,000 other women for single-engine flight training. Kay was one of only 16 who qualified. She was selected and passed the course.

“For the last two years of the war, I was flying aircraft that had one engine from one field to another, or from the operational fields back to the factory. I ferried Spitfires, Hellcats, Hurricanes, Tiger Moths, Swordfish and Barracudas on visual flying with no radios.”

From 1944 to the end of the war, Kay was Third Officer Ferry Pilot in the Air Transport Auxiliary. There were only about 162 women ferrying aircraft in non-operational flying.

At the time of their marriage, Hirsch was a ferry pilot for the Royal Air Force (RAF) and Zach was in the weather service branch of the U.S. Army Air Corps, which became the United States Air Force.

In 1946, she joined her husband in America. Eighteen years later, they moved to Minnesota where she worked for the Guthrie Theater in Minneapolis, which Sir Tyrone Guthrie had founded. She remained on the staff until 1972. She also worked as a senior costumer for the Minnesota ballet, Minnesota Opera, Minneapolis Children’s Theatre and Chanhassen Johnson Theatre.

“The Guthrie Theater was and still is famous for good quality costuming.”

After the war, Kay resumed her costume design career, and Zach joined the professional service of the Boy Scouts of America and became a national leader.

When the family transferred to New Jersey, she became a member of the costume staff for the McCarter Theater in Princeton, NJ for five years.

Then she moved to Dallas, Texas in 1979. There she sewed for Six Flags Over Texas, was senior sewer for the Dallas ballet, Dallas Opera, Shakespeare in the Park and the drama department at SMU.

“It was fun working all those different places.”

When he retired in 1984, she and Zach traveled to Phoenix to look at homes but fell in love with Prescott.

“We heard about the Prescott Fine Arts Association and quickly got involved with the PFAA.

“When we arrived in Prescott in 1986, we recognized a need to do costuming. I had never done community theater before.”

Hirsch found or sewed costumes for the performers. She mended and cleaned costumes during the run of the show. She was also the dresser, assisting performers with costume changes.

She designed and made costumes for over 110 main stage and Family Theatre Prescott Fine Arts Association productions in her 26 years as a volunteer resident costumer. One of her favorite shows as a costumer was Kiss Me Kate.

“A lot of people tend to think costuming is just throwing fabric together. It’s exactly the reverse because in community theater you’ve got clothes you perform in night after night. The wear and tear on them are much more than on a normal piece of clothing.”

The theater provided the Hirsch family the opportunity to make new friends, including young people.

“The high school kids coming through – meeting them and getting to know them, keeps us in touch with young people. Where else can you have a group of people from six years old to sixty plus, and everything in between? Where else, but in the theater?”

Hirsch was convinced that many people would enjoy the plays if they would only attend them.

“My husband and I are extremely impressed with the quality of the performances here. They are more professional than your average amateur production; the scenery and lighting are extremely well done.”

Kay Hirsch, the “grande dame of Prescott costuming” passed away on Sunday, October 17, 2010, at the age of 90 after an accidental fall and an ensuing infection.

3 comments on ““Grande Dame of Costuming””